We built Building Strength for you!

Hey, we made something for you.

You’re a guy who’s the far side of 30, maybe with a young family, and you’re thinking more about your long term health. 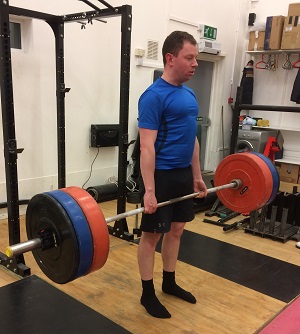 You also want the satisfaction of achievement, of making progress at something. Lifting weights appeals to you because it’s measurable and you can easily see when you’re making progress.

Plus, the proven health benefits of more muscle, less fat, strong bones and joints, better ability to do the activities and sports you love, have you raising your hand and saying ‘Yes, I want in’.

So, you go out and buy a book like Mark Rippetoe’s Starting Strength or you watch loads of youtube videos on lifting.

And here’s where it starts to get tricky.

First of all, there’s all these people contradicting themselves on youtube, saying they have the answer. Who to trust?

That powerlifting dude sounds credible, but is it relevant to beginners like you? That fitness personality is very polished, but is he really an expert?

And while Starting Strength is a hugely detailed book, applying it to yourself in a commercial gym environment is more difficult that you first thought. Why doesn’t my form look like the guy in the photo? How can I get my lower back do that?!

You realise that you might be putting yourself at risk of injury if you can’t do this powerlifting malarkey properly by yourself.

Not to mention the potential embarrassment of screwing it up in front of a gym full of bros.

You could get a personal trainer – but that’s expensive. The whole point of buying the book and watching the videos was so that you could do this on your own for less money.

Or you may have considered the C-word – Crossfit!

Crossfit is very popular, but it’s not a dedicated weight training protocol. Often technique is compromised in favour of speed. There’s a strong competitive ethos, which is not for everybody.

Can you relate to any of this?

Having spent the early part of my strength coaching career getting women into lifting weights and crushing it in the weight room, I hadn’t really thought about the issues men were having. Until I had a conversation that really struck a chord with me. 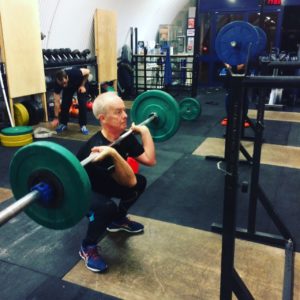 I was on a rock climbing trip and fell into conversation with another member of the group, Ian. When Ian found out that I was a strength coach, he started telling me about his experience.

Ian is a software developer and had found out about the Starting Strength book from friends and colleagues who were getting into lifting weights. He had bought the book and started lifting on his own.

Now Ian’s a reasonably fit guy, into rock climbing and fitness in general.

But he found that after the first few weeks, he stalled out and was struggling to make progress on his own. He was nervous about going too heavy for fear of injury and wasn’t sure his technique was correct.

A few weeks later, I spoke to another friend, Mark, who told me he wanted to learn to lift weights. He had joined a Crossfit gym because that seemed like the only option in his area. But he hadn’t liked the coaching style. He felt that there wasn’t enough technique coaching and told me that people were left to their own devices in class and were clearly doing things badly.

Since then, I’ve talked to many more guys who have been in similar situations.

For these dudes, and for many others, Superhero Strength is a faraway dream at this point!

So, I decided to create a class to solve this problem. It’s called Building Strength. And it does what it says on the tin.

The men I speak to tend to want three things:

Here are my four top tips, whether you are training on your own or in a group like our Building Strength class.

Programs like the classic 5×5 or Starting Strength programs work well because they include a small number of ‘bang for your buck’ exercises. You get a lot of repetition which allows you to build competence in a few key lifts. Be wary of any program that includes a lot of variety or different exercises every day – you don’t need it!

2. Do mobility work as part of every warm up

But no need to overdo it. You don’t need to spend half an hour foam rolling before your training session. My tip is to pick two exercises related to the big lift that you are doing that session. For example, if you are squatting, I suggest one ankle mobility exercise and one hip mobility exercise. Do a couple of sets and then you are good to go.

If you struggle to squat deep, check out my video below

3. The most effective programs build in progressive overload

Many people don’t grasp this important concept when they first start training. As a newbie to weight training, your body will adapt quickly to any new stimulus. Because it adapts quickly, you need to keep increasing the stimulus in order to keep making progress. This is the principle of progressive overload.

Once you can do a weight for a given number of reps with good technique, then increase the challenge – most simply, by adding a small amount of weight or increasing the number of reps. If you’ve been lifting the same weight for the same number of sets and reps for four weeks or more, you ain’t getting’ any stronger!

4. Great technique is a process

Great technique is not something you have on day one. You get better with practise. It’s like learning to walk. When I work with beginners, I keep it simple and pick the most important thing. We work on one thing at a time. If you try to get everything right at once, it’s really hard and you could spend months struggling. However, if you were to pick one thing per month – it could be your stance, the tempo of your lift, your joint angles – after six months you could have solved six different issues.

I hope you’ve found these tips useful. I’ve included some posts to follow up on below.

And why not come and try our Building Strength class if you are in London?

5 things you’re not doing to get stronger

Protect your back when deadlifting