Just strong: it’s not about out-lifting the guys

I’m all for female empowerment, but all of this ‘I can out-lift the blokes at the gym’ or ‘My girlfriend can out-lift you’ talk frustrates me.

Physiologically speaking, unless you are an exceptional strength athlete, you’re unlikely to be able to out-lift a bloke under comparable circumstances (training age and experience, sets and reps etc).

The reason you can out-squat the guys in your gym is because you train your squat and they don’t. You train for strength and they train for the tshirt muscles. You’re doing 5 sets of 5, they’re doing 10 sets of 10.

The reality of typical physiology

The truth is that if you take the average guy and put him on a decent strength training programme, he should be out-lifting you in most exercises in a matter of weeks. 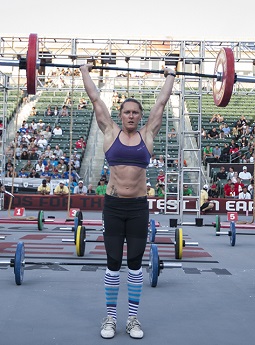 I recently saw a video of Crossfitter Becky Pykett squatting 100kg for 25 reps, which is impressive in anyone’s book.

But they are the exceptions, the elite, the ‘genetic freaks’.

Even if you compare loads relative to bodyweight, men will still slightly dominate, although much less so with lower body exercises like squat.

Why? Because men in general have more muscle and bone mass, heavier bodyweights and longer levers than women (you can always find exceptions of course). And naturally more anabolic hormones.

Saying that, once you get into comparing relative bodyweight, fat-free mass and muscle cross-sectional area, the differences between the sexes almost disappear.

Still, that’s a text book scenario, not what you experience in real life. In reality it would be tricky to find a man with exactly the same bodyweight, fat free mass and muscle cross section as you to challenge to a lifting competition!

What exactly are you proud of (smug about)?

I like my squats and I’m proud of my squat numbers. But it’s precisely because I know what goes into a good, heavy ass-to-grass squat that I would get little pleasure from comparing my excellent squat to a half assed effort by Johnny Pec Flye down the local globo.

Oh great. After years of training hard, it appears that I can squat more than some chicken-legged bloke who joined the gym last month and gets his squat technique from Body Pump. I’m so badass.

As far as my own training goes, I genuinely don’t give a rat’s arse what some bloke is lifting or not lifting. It doesn’t relate to me. That’s why I enjoy training with other women of a similar level, with similar goals and find it much more motivational.

What I do like to be proud of is lifting well, using good technique, getting strong through range of motion instead of just what’s comfortable, and having a focussed no-nonsense approach.

This is where a lot of women can genuinely be ‘smug’ (if that’s what you want to be) as you’ve made the effort to learn how to lift properly instead of douching your way through it assuming that, as a bloke, you’ve naturally got weight lifting DNA in you.

Weight training isn’t an intrinsically ‘male’ activity and men aren’t naturally better at it from a technical point of view than women. Men also don’t naturally work harder than women in the gym, nor do they instinctively have the right mindset to be strong.

I am proud of the women who come to me wanting to learn how to lift ‘properly’ and how to train properly. Hallelujah, people who actually recognise that lifting well is a skill that needs to be coached and that writing an effective training programme takes some knowledge and experience!

My point is, it’s not about out-lifting the guys, it’s about exploring your own strength potential and getting good at the things you want to be good at.

Men actually neglect strength training more than you probably realise. Just because they are lifting weights it doesn’t mean they are getting strong.

If you want to be surprised, be surprised at the lack of knowledge. Yes, those cocky, noisy blokes in the weight room are sometimes winging it!

There’s always a point in my Ladies Who Lift programme, a few weeks in, where it becomes very obvious to the participants that everyone else in their local gym is doing it wrong.

The technique is terrible, there’s all kinds of ‘cheating’ going on, there are people wearing belts to do bicep curls… you can imagine the scene.

But it’s also important to realise that if you are bodybuilding, in most cases the amount of weight on the bar or stack is not important. Male or female, if you are strength training, don’t bother comparing your weights to someone who is bodybuilding.

As an aside, beginner bodybuilders should do more strength work with heavier weights, to build a strength base. Advanced bodybuilders can afford to use less weight (relatively) as they can tolerate more volume, are better at sustaining tension in the muscle and can isolate more.

While I can out-lift plenty of men in a variety of exercises, I’m under no illusions that this is the case because I’ve spent years training these movements hard and consistently, using strength training protocols that prioritise neural adaptation and technique development over muscular hypertrophy.

In fact, as a strength coach, I aim to get my guys to overtake my own numbers as soon as possible.

The vast majority of the guys who walk into my Olympic Lifting beginners course, for example, can’t front squat as much as I can, let alone clean or snatch. But many of them are able to hit or overtake my numbers – which have taken me years of training to achieve – within a couple of months (old injuries, restrictions aside). That’s me doing my job as a coach. 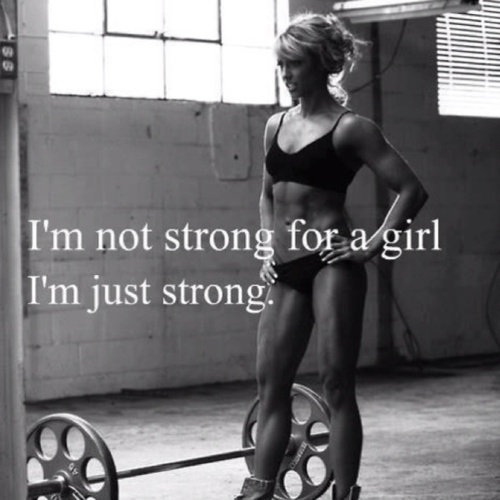 Here’s a motivational quotation I actually like for a change. If you’re going to compare yourself to the guys, you will end up qualifying your achievements with ‘for a girl’. Because the numbers are just different. A single rep with bodyweight in the bench press is pretty impressive for a girl, but it’s pretty basic for a guy.

And look, the opposite is also true. Just because a man is lifting more weight than you in a particular exercise does not mean he has more experience, better knowledge or is a ‘better’ lifter than you!

Some of my very experienced female lifting friends have had the joy of men giving them training advice when those blokes’ own strength training experience is significantly thinner. Bless the mansplainers!

I love watching the women’s categories in strength sports because I feel closer to the athletes, and am more inspired. The technique is just as good, the women are making just as much of their potential as the men, fighting just as hard.

If only the weight on the bar was important, we’d only ever watch the super heavyweight men’s category.

In fact, people love watching different weight classes for a variety of reasons: because it is closest to their own category, or records are being smashed, or it’s very competitive – so many reasons.

Women’s lifting is awesome and I feel that people are actually taking the edge off it by comparing their accomplishments to men who aren’t even properly strength trained.

I’d love to know if you agree or disagree.