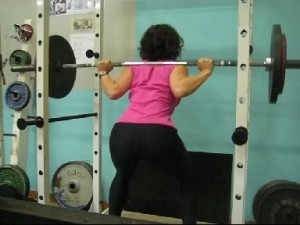 Picture the scene: you rock up to the gym all excited to do your 5×5 squats, only to find the squat rack is occupied by three dudes doing endless seated shoulder press.

You immediately panic about your lack of ‘gainz’ and sulk because no exercise can possibly come close to the awesomeness that is the barbell back squat. Your workout is ruined.

Before I was a fitness professional, I was a regular gym lifter, loving my squats, deadlifts and cleans. I thought that the big barbell lifts were the be-all and end-all; unless I was lifting enormous weights, I didn’t want to know.

The squat rack being occupied was a disaster for me, so much so that I would get to the gym super early so I could get in there first and stake my claim!

Many years later, I am now armed with better knowledge and much more experience. I have seen the value of exercises other than the big barbell exercises. I’ve even felt the lack of them in my own training.

If the squat rack is occupied, there is a lot you can do to improve your squat. And you don’t even have to use weights.

I used to think single leg exercises were a bit of a novelty party piece. However I have since seen them work incredibly well on a variety of clients and am a convert.

Most people have some kind of strength or movement asymmetry. Often this is the result of old injuries that people have almost forgotten about.

But the old injury resulted in a subtle compensation pattern or a muscular inhibition that never went away.

Years later, it shows up in your squat or your deadlift.

Ever sprained your ankle? Ever knocked your hip or pelvis? You’ve probably forgotten all about it, but the repercussions of that minor injury may still be in your movement patterns today.

A recent PT client of mine had an old ankle injury from years ago. She had no idea it was still affecting her lower body movement. But her squat and deadlift technique showed up a major imbalance and a seriously weak glute that was causing her hip to hike up higher on one side – not a good idea when lifting heavy weights!

Doing squats and deadlifts got her stronger, but didn’t fix the imbalance. Single leg work was the key to bringing that lazy glute up to scratch.

Even if you have never had an injury, important lifting muscles such as the glutes may be inhibited due to a sedentary lifestyle and failure to regularly and effectively activate that particular muscle group.

When we do bilateral exercises, i.e. using both sides, the stronger side will compensate for the weaker side. If the weaker side were to catch up, the entire system would be stronger. The best way to do this is to work both sides independently, with single leg exercises.

How to train single leg exercises

The useful thing about single leg exercises is that they can be done effectively with little to no weight.

In fact, according to glute training expert Brett Contreras, “most people can contract their glutes harder during bodyweight glute activation exercises than during their max in squats and deads”.

Here are some exercises that I have found to be useful for my clients in improving their squats and deadlifts.

If you have an inhibited or weak glute, the single leg glute bridge is a great place to start. If you have never done this exercise before or you are relatively new to training, start with this simpler version on the floor.

The following version is much more challenging but very effective, especially if you already have some strength and have been training for a while. The version of the glute bridge below was the game changer for my client with the ankle injury.

Also known as a bulgarian split squat, this exercise is an amazing strength builder. It is quite tricky, so I advise this for people who are already comfortable doing a normal split squat with both feet on the floor.

I also tend to start people on a small box or step first, and only raise the back leg higher when they have gained competence in the low version.

In this exercise, the front leg is working hard; glutes, hamstrings and quads should all be engaged. But the added benefit of the back leg raised position is that it really stretches the hip flexors on the other side too.

I love this lunge variation! I get really sore glutes after doing these 😉

Normal lunges are great as an overall leg developer. But this variation gives hips greater range of motion so that the glutes works harder than they would in a normal lunge (and the quads work less).

This glute variation takes pressure off patellofemoral joint too, so if you suffer from knee pain or discomfort, or you are coming back from a knee injury, you may find this variation more comfortable than the traditional lunge.

The single leg deadlift works both glutes and hamstrings. It’s also quite a balancey exercise, so good for stability and proprioception. When we stand on one leg, we engage muscles that don’t normally engage much in a bilateral exercise.

This is the one exercise in this list that probably won’t make a huge difference to your squat strength. But I’ve included it because it works the body in a way that bilateral squats and deadlifts neglect. Most athletic activity in life and in sports is done on one leg at a time, so for true functional strength, we shouldn’t neglect the parts that squats and deadlifts don’t quite reach 😉

Have you ever wondered why we don’t just collapse over to the side when we stand on one leg? It’s because a bunch of muscles are working hard to maintain pelvic stability when balanced on one leg.

This has repercussions for any running or athletic activity that requires us to be on one leg. If you are struggling to balance on one leg, your stability muscles aren’t doing their job properly!

If you really struggle with your balance on this one, you can lightly hold onto a rack or wall with your free hand. Aim to progress to the free standing version.

So there you have it! You will never be at a loss when the squat rack is occupied.

Incorporate these single leg exercises into your training and you will be stronger, more athletic and better at life than ever before.

Want to know how we can help you?

Get a stronger pull off the floor using halting pulls