Imagine a wet noodle deadlifting 100kg! Knees, hips, back all moving from side to side and collapsing over.

I’ve seen quite a few ‘wet noodle’ deadlifts in my time. They are more common in women, because women tend to be more mobile and curvy (e.g. narrower waist relative to hips).

A typical scenario that I see in deadlift novices (those who have been lifting for a few months) is a woman who is strong, and has legs strong enough to lift some pretty big weight. But the rest of the system is noodly. This type of deadlift technique puts a lot of strain on the muscles and results in power wasted.

But as soon as people implement some of the tips I talk about below, their deadlift technique can change in an instant, from wet noodle to iron rod!

It would be wrong to say that everyone’s deadlift max immediately shoots up – it doesn’t always happen like that. You have to get strong in different places and that takes time.

But at least I don’t fear for people’s spines every time they lift heavy!

The importance of tension in deadlift technique

Something I see in a lot of novices is that there’s not enough tension in the system to effectively transfer force through the body to make the lift.

The legs are working hard but it’s not transferring upwards, through the hips and core to the rest of the body.

One of my clients described this as feeling that her lower body and her upper body were almost disconnected. It’s a good way to describe it.

Effective deadlift technique is about more than just keeping an arch in your lower back (though that is very important).

When the body is noodly, the weight feels heavier. But you can make the same weight feel like 90% instead of 100% if you have tension in the right places.

So here are some simple cues to try, in order to increase tension and make your deadlift feel stronger.

Note: I recommend that you film yourself doing a heavy deadlift (doesn’t have to be max but 90% at least) and film yourself from the front, from the back and from the side. The front and back views are particularly important because you want to see whether your knees are dropping in and whether your hips move from side to side during the lift.

The idea is not necessarily to use all of these cues, but to try one, maybe two and see what difference it makes.

If your knees collapse in during the pull:

Screw your feet into the floor to engage glutes 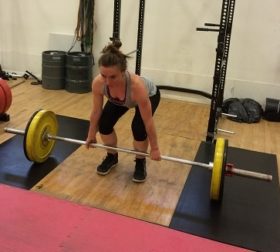 Pushing knees out against arms

If you have side-to-side movement during the lift (e.g. hips sway from side to side as you are pulling off the floor to the knee):

Drive through heels – “push the floor away” 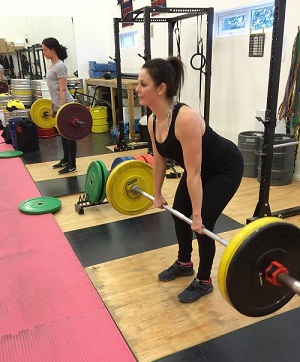 Brace and push the floor away

If your upper back rounds over:

“Crush an orange in your armpit” – to engage lats

If your lower back rounds over:

Reduce the weight on the bar!

Is your deadlift stance too wide?

Help! My grip fails on deadlifts