Many clients come to me saying that they can’t squat below parallel.

It turns out that after working with me for a session or two, around half of them can squat below parallel. And the rest have all improved their squat depth significantly.

I’d love to say I’m some kind of mad genius, but my method is really pretty simple.

I give people a target to hit!

A target is just a box or a pile of plates, which the client simply has to touch and go on every squat. They don’t sit on or rest on the target, just use it as a way of consistently going to the same depth.

Our brains are wired to aim for targets. Ever set yourself a target of completing an exercise within a certain time? 9 times out of 10, you’ll hit the target just because you set one! 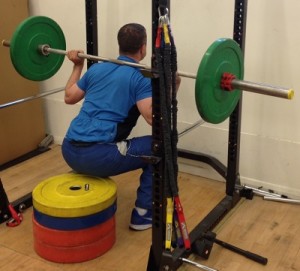 Tony’s first time squatting with a barbell. We use a target to get people squatting to their maximum safe depth right from the start.

For squatting, we start at a height the client is comfortable with. We then gradually lower the target until they’ve pushed a bit lower.

We’ll only ever get people squatting to a depth that is safe for their lower back. This means a depth at which the lower back is remains flat, not rounded (or ‘tucked under’).

Many people are very cautious about their back position and will stop several inches above where they could safely go.

Determining safe depth using this kind of progressive method can be a revelation for people, especially those who are used to training on their own.

People who never thought they could squat below parallel suddenly can.

The first time I get people squatting to a target, I can see as they descend that they are thinking ‘where’s that box?!!!’

It’s further than you think. The brain goes into panic mode as you descend with a load on your back, even a modest load. All it wants to do is to stand your body back up.

Without a target to hit, it’s extremely difficult for a novice lifter to know whether they are going to their maximum safe depth on every rep.

After all, as the one with the load on your back, you can’t exactly take a dispassionate view of the situation!

This becomes even more of an issue as the weight gets heavier, or as the set progresses. How many times do people bottle it on the last couple of reps and finish the set with a couple of shallow reps?

When I work with people in a class or workshop, I often see up to several inches of improvement in one session.

This is because the real reason the lifter couldn’t hit depth wasn’t lack of mobility (what everyone assumes) or lack of strength. It was just the brain not allowing it through fear of the consequences (I might not be able to stand up).

Squatting to a target also improves balance and technique, since it forces people to ‘sit back’ onto the box or pile of plates. This encourages people to hinge at the hips and shift the weight back onto the heels, improving balance and making the movement feel safer.

Starting with a comfortable target and gradually reducing the height also serves as a warm up, both physical and mental. The body is able to ‘feel’ its way into the position gradually, reducing feelings of panic.

I always ensure that my lifters are fully prepped before squatting low. As an older (40+) lifter myself, I know that it takes a while to warm up joints and muscles, get all those clicks and niggles out of the way.

Some of us can’t walk into a gym and be squatting deep 2 minutes later.

Here’s what I have people do:

First, a generalised dynamic warm up to get the whole body loose and stretched. [Here’s a mobility flow I’ve used with my lifters]

Then a movement preparation circuit, related to the workout ahead, but with light loading. So for a squat session, I might pick 2 or 3 exercises out of the following list:

in a low volume circuit for 2-3 rounds.

Not only have we mobilised the body but we’ve also prepped the nervous system for the kind of movements and muscles we’re expecting it to ennervate.

I still can’t squat below parallel, what now?

You may have mobility issues that a target just won’t fix right away. A useful tactic is to raise your heels up on 2.5kg plates, which will allow you to squat lower.

You can then work on your mobility while still enjoying the many benefits of deeper squats.

Why squat below parallel?

Come to one of our classes or workshops

How to stop falling over in a deep squat position